(Okayama, 04 October) Okayama University researchers control the timing and location of protein synthesis using a photoresponsive compound that is an inactive key molecule until it is activated by brief irradiation.

The production of proteins at distinct times and locations regulates cell functions, such as cell development and differentiation into specific cell types. The ability to exert spatiotemporal control over protein synthesis would help investigate these processes. Now Takashi Ohtsuki and colleagues in the Department of Medical Bioengineering at Okayama University, Japan, have shown that they can prevent protein synthesis reactions from taking place using a photoresponsive molecular cage (see Figure). Brief exposure to light releases key protein synthesis molecules from the cage without damaging them, so that protein synthesis takes place at the time and location of irradiation.

In their study, the researchers used an aminoacyl-transfer RNA (aa-tRNA), a molecule that helps decode messenger RNA so that protein synthesis can occur. Previous work had successfully inhibited protein synthesis by protecting aa-tRNA with a molecular cage of nitroveratryloxycarbonyl group. However the 30 minutes of light exposure required to release the aa-tRNA from the cage caused damage that then inhibited the protein’s function.

Instead Ohtsuki’s team used (7-diethylaminocoumarin-4-yl)methoxycarbonyl (DEACM) group. While the caged aa-tRNA was stable for at least 4 hours, irradiating for just 20 seconds released the aa-tRNA. The researchers demonstrated light-controlled activity of the caged aa-tRNA in vitro, in a gel, in liposomes and in mammalian cells.

“This method of spatiotemporally photocontrolling translation offers a promising approach for investigating the relationship between local translation and biological functions,” conclude the researchers in their report of the work. As well as a tool for protein synthesis investigations the team suggest it could also be used to insert artificial amino acids into proteins in a controlled manner for further studies.

Background
What are proteins?

Proteins are biomolecules comprising specific sequences of amino acids. They are responsible for a number of functions including metabolic reaction catalysis, DNA replication, responses to stimuli and molecular transport. Constant protein generation is required to balance the loss of proteins through degradation and secretion from cells.

How are proteins synthesised?

The usual mode for protein synthesis uses transfer RNA (tRNA), messenger RNA (mRNA) and ribosomes to assemble the amino acid chains in the right order. The role of the tRNA is to link the amino acids to the mRNA to help decode it. The ribosome matches the aminoacyl-tRNA (tRNA carrying an amino acid) with the mRNA so that the protein encoded on the mRNA is synthesized.

How does the light-activated DEACM cage work?

The DEACM group protects the aa-tRNA so that it cannot interact with the molecules necessary for protein synthesis. On exposure to light, the DEACM-aa-tRNA degrades into separate components releasing the aa-tRNA. 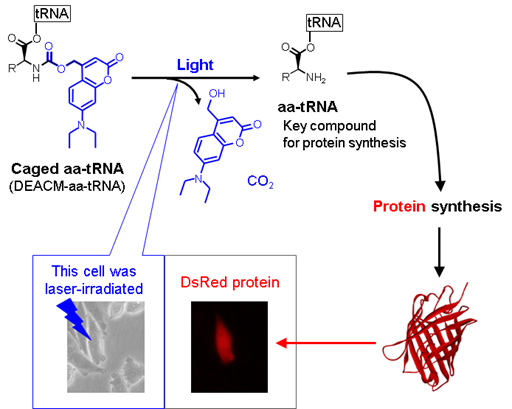 Photoinduced DsRed synthesis in a mammalian cell. DsRed was synthesized only within the irradiated cell.